Once again the real Jack-in-the-Green could not be reincarnated, and so a virtual Jack appeared on the internet:

We also took to TikTok with the launch of a Jig Competition which is open to any Oxford University or Brookes University Student.

With pandemic restriction preventing the usual Mummers’ visitations to pubs in the Jericho area of Oxford, The Ancient Mummers took to Zoom to perform the Holton Mummers Play in aid of Helen & Douglas House. Please donate what you can to support their invaluable work for infants & children, in Oxfordshire & surrounding counties. Thank you.

Due to the Covid-19 crisis and ongoing lockdown, Oxford’s May Morning celebrations were cancelled this year, with our dancers all safely isolated at home.

However, tradition finds a way! And so, plans for a virtual May Morning were hastily made…

Our marking of the occasion began, as it does every year, with dressing Jack-in-the-Green – this time in virtual form.

Then came the day itself.

Many of us began by rising before 6am to listen to Daily Info’s broadcast of the socially-distanced Magdalen College Choir singing ‘Hymnus Eucharistus’ from their homes, imagining ourselves standing below the tower bleary-eyed, shivering in the early-morning mist or warming ourselves with the contents of assorted hip flasks and thermos flasks. From there, rather than to Radcliffe Square, we proceeded forth in a disorderly manner to dance a symbolic dance by ourselves in gardens, quiet corners of parks, and deserted meadows.

Most importantly, Mac danced a solo version of “Bonny Green” from Bucknell, which is normally performed around Jack-in-the-Green in Radcliffe square as our first dance on May Morning – in this case, an unsuspecting front-garden shrubbery made a handy stand-in for the spirit of Summer:

Those still following Daily Info’s livestream were treated to a spoons-playing tutorial from one of our dancers, Rachael, and a dance from the squire of the Oxford City Morris Men, amongst many other delights…

By 9am, it was time for the traditional Morris Dancers’ Breakfast – typically served at Teddy Hall, but moved on this occasion to Zoom, with a little more variety in menu options than usual, and BYO beer.

Whilst our private festivities continued online, the morris-loving public(!) had the chance to watch a series of socially-distanced jigs, which our dancers and musicians had worked hard to compile over the preceding weeks:

Rachael and Greg, accompanied by Stan, attempt a socially-distanced double jig! I’ll Go and Enlist for a Sailor (Sherborne), with at least 150 miles between each of the people involved.

Nerys dances the Princess Royal, accompanied by her own playing!

Our own Squire, Gerard, dances Ladies of Pleasure (Bledington)

Alex danced his own interpretation of None so Pretty (Fieldtown)

Another dance from Graham – this time Ladies Pleasure (Fieldtown)

Rosemary danced a solo version of I’ll Go and Enlist for a Sailor (Sherborne), sent to us all the way from Berlin!

Gerard devised his very own new jig specially for the occasion, “the Lockdown”, in the style of Bledington, accompanied by his own drumming…

And last but not least, Gerard also contributed his rendition of the Nutting Girl (Fieldtown)

Normally, May Morning would end for morris dancers at the Rose and Crown on North Parade, where we’d dance until we could dance no more, drink beer, eat sausages, and eventually settle in to play music and sing songs… Unfortunately that experience could not be replicated by electronic means, but we did send our collective greetings to Andrew at the Rose and Crown, and in the general spirit, we have this musical offering from Nick & Jacqui McGuinn to finish off the day:

Until next year: Wassail!

This year we have been unable to meet to dress Jack in the Green, as we would traditionally do on May Eve.

However, we have made some efforts at a virtual Jack.

The first shows the process of construction from previous years:

The next has been constructed this year, from photos of Spring foliage sent in by our members from around the UK, and even from as far afield as Toronto and Pnom Penh. Here’s the assembly process:

And the finished article, completed on the evening of the 30th of April as is traditional: 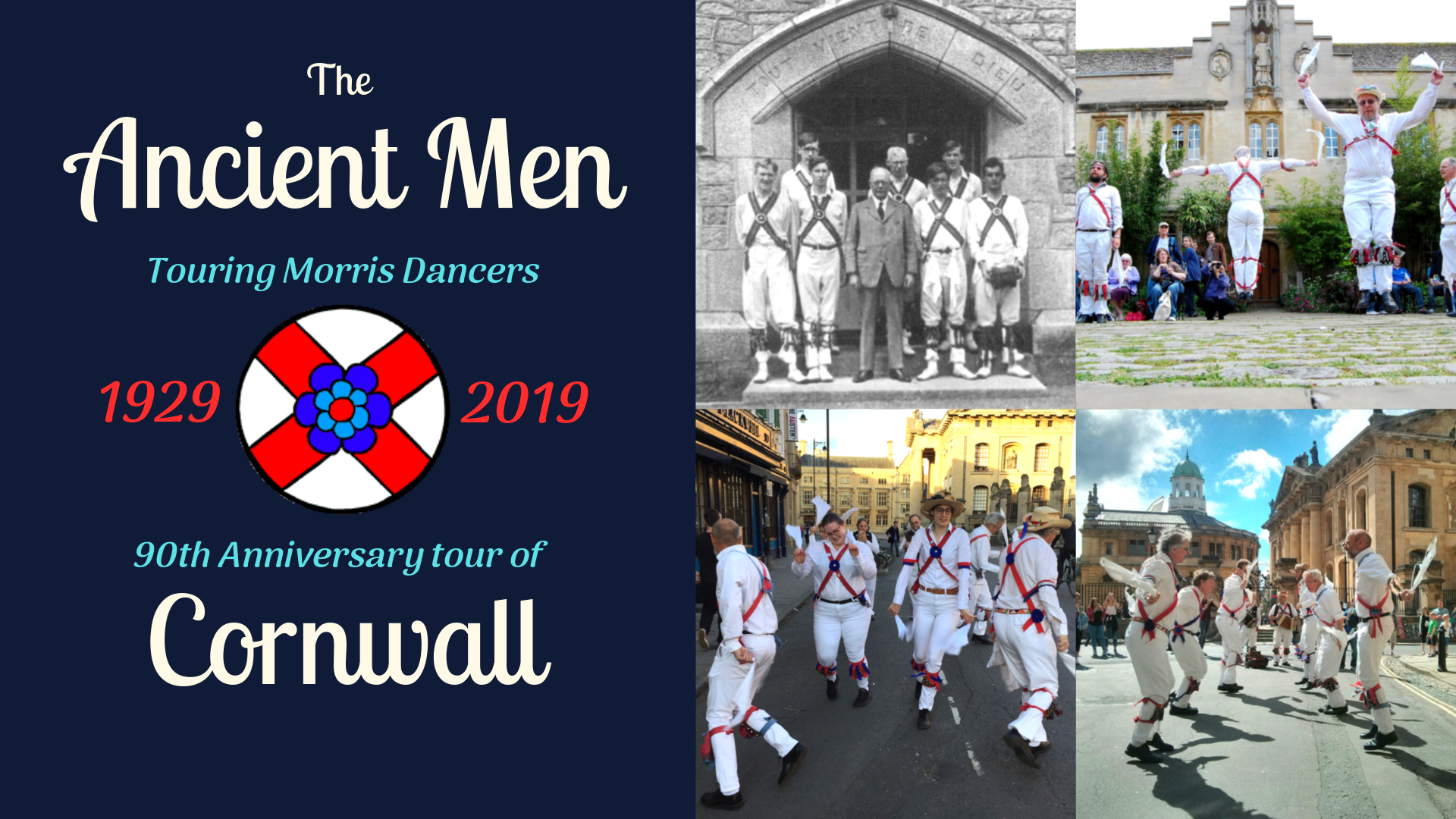 The Ancient Men (“Not all Ancient, and not all Men”) are a group of travelling Morris dancers who gather together each summer to tour towns and villages in a chosen area.

This Summer, we will be touring Cornwall to commemorate the 90th anniversary of the first tour made by Oxford University Men’s Morris in 1929.

In 1929 a small group of Cotswold Morris dancers from Oxford University, including Henry Trefusis of Trefusis, Flushing, made Cornwall the scene of their first ever dance tour outside Oxfordshire.

This group eventually became the Oxford University Morris Men, who on tour are known as The Ancient Men.

This year to mark the 90th anniversary year of the original tour, The Ancient Men will be re-visiting Cornwall during the last week of July 2019, and returning to dance at some of the venues of 1929 and 1979. 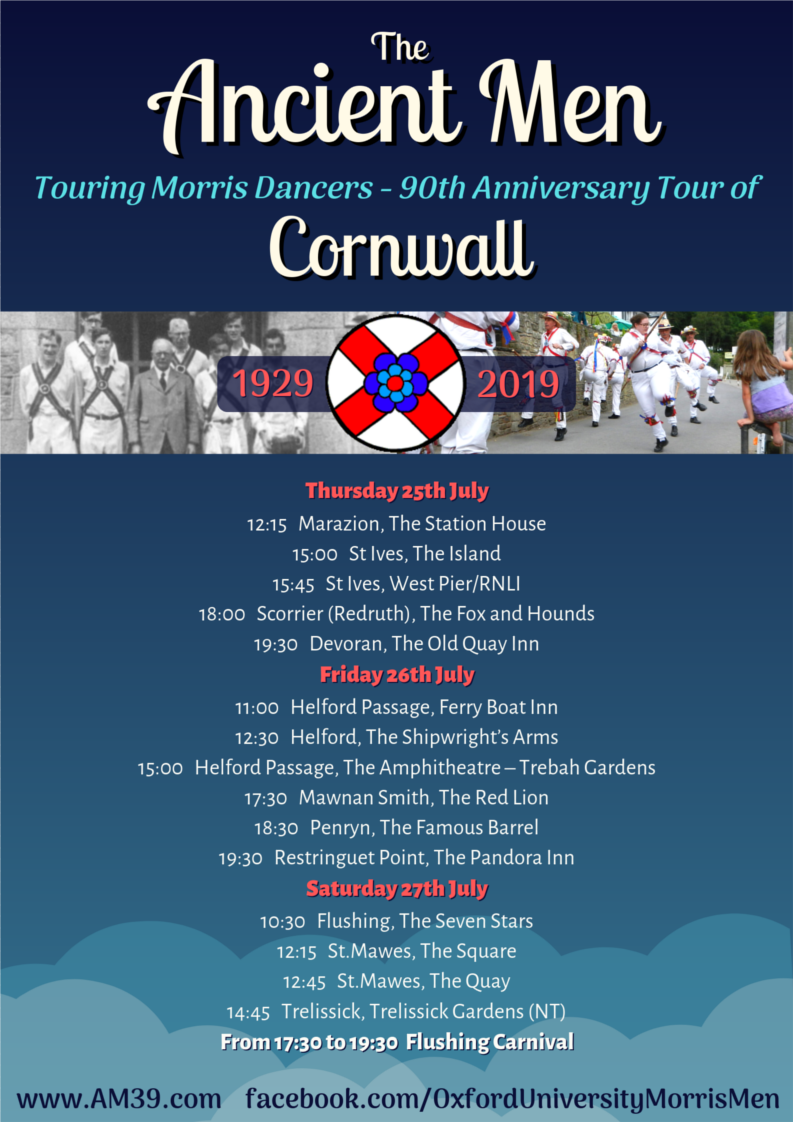 Oxford University Morris Men’s summer dance-out calendar for 2019, in combination with Oxford City Morris Men,  is (provisionally) as follows – although please check our Facebook page for confirmation on the day in case of last-minute changes if you are planning to come and see us!

Monday 20th of May –  8:00pm at The Victoria Arms, Old Marston with Masons Apron, Abingdon Traditional Morris Dances and The Vale Islanders 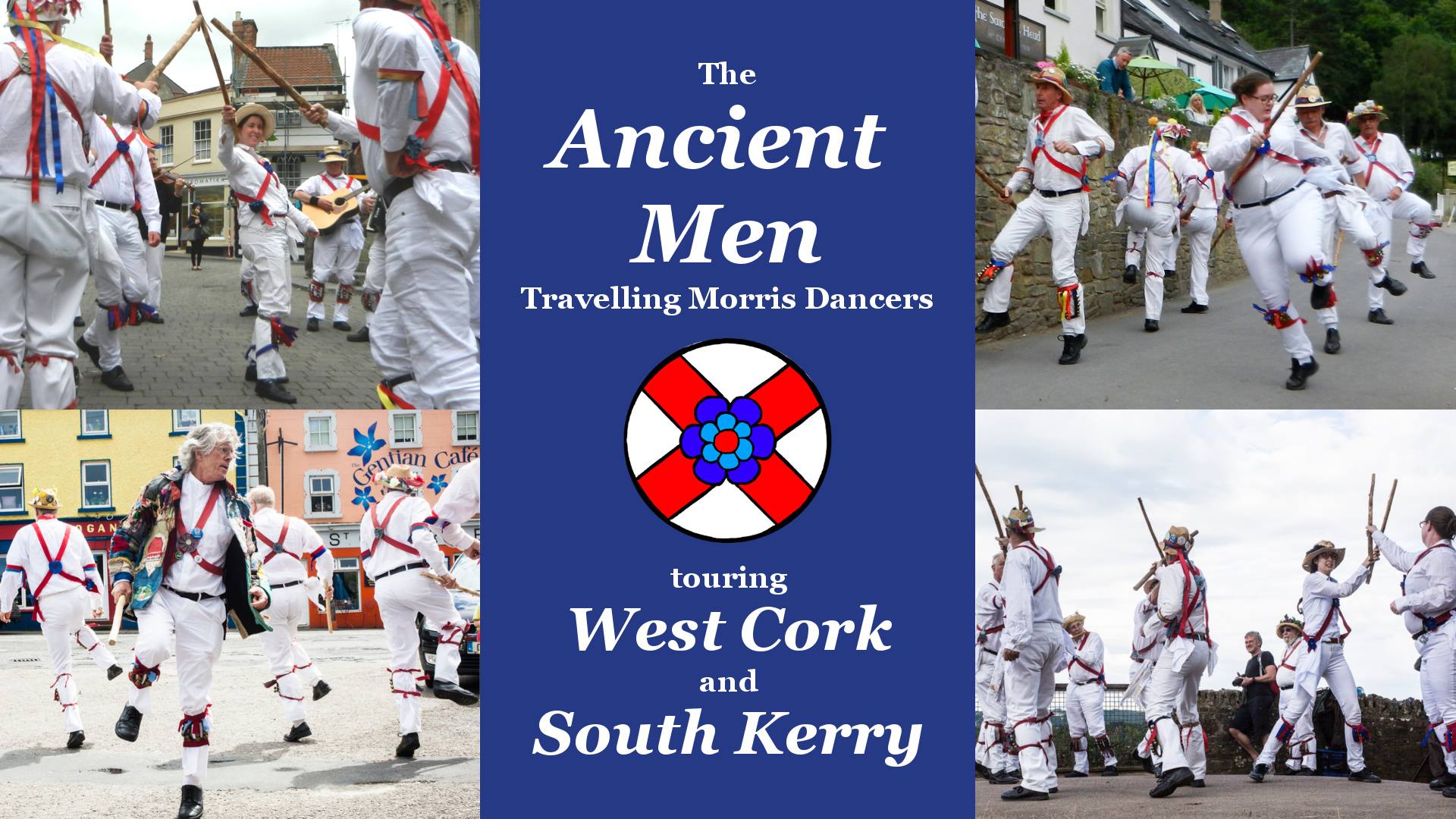 The Ancient Men are a group of travelling Morris dancers who gather together during the summer to tour towns and villages in a chosen area. Our traditional dances come from the villages of the Cotswold Hills in southern England, and have an antiquity stretching back hundreds of years.

Traditionally, we do a public performance in a town or village before moving on to the next location. Our performance is guaranteed to bring good luck, fine weather and fertility. Do come and see us if you can.

As Ancient upholders of the traditional dances of old England, we are delighted to be visiting West Cork and South Kerry. We have toured in Ireland previously – in Kilkenny and West Cork in 1990, in Bréifne (Sligo and Leitrim) in 2007, and in West Clare in 2015.

From our base near Bantry, our 2018 tour of West Cork and South Kerry takes us up to Kenmare, through the Beara and Sheep’s Head peninsulas, and then down to Baltimore and Sherkin Island, as well as to several inland locations.

And at the end of a busy and strenuous day, don’t be surprised to see us retiring to the nearest bar for a well-earned drink, along with some music and song. You are very welcome to join us!

No one can be sure of how, when and where Morris dancing originated. It was known in England as far back as the 15th century and in those times would have been familiar in villages throughout the country, danced on special occasions by selected members of the community. Each village had its own dances and style of performing them.

By the 19th century Morris dancing had nearly died out, but in 1899 folklore collector Cecil Sharp, inspired by a chance meeting with a team of Morris dancers in the village of Headington in Oxfordshire, started to note down the dances and the tunes that accompany them. This formed the basis for a revival of interest in the tradition and probably saved Morris dancing from extinction. There are now many teams in England and other parts of the world who regularly perform these dances.

More about the Ancient Men

The Ancient Men can trace their history back to the early years of the 20th century, making them one of the oldest revival teams in England. Since their first tour, in Fairford, Gloucestershire, in 1952, the Ancient Men have made over 100 tours, not just in England but in many other parts of the world, including the United States, Estonia, the Czech Republic, Japan, Italy and Russia. Although the members of our group have become globally scattered over the years – some of the dancers you see have flown in from Kenya, the United States and New Zealand – we still enjoy getting together each year and renewing old friendships.

Oxford University Morris Men’s summer dance-out calendar for 2018, in combination with Oxford City Morris Men,  is (provisionally) as follows – although please check our Facebook page for confirmation on the day in case of last-minute changes if you are planning to come and see us!

Our touring alter-egos the Ancient Men are delighted to be visiting North Somerset this Summer.

We look forward to experiencing the dramatic scenery of the Mendip hills, absorbing the mystical atmosphere of ancient monuments, visiting the many historic towns and villages – and of course, appreciating the local cider.

From our base near Wrington, our tour takes us from Wells and Glastonbury in the South, to the cities of Bristol and Bath in the North.

Folk Weekend Oxford usually marks the unofficial beginning of our dancing out season, coming a week or two before our official start on May Morning.

This year we were scheduled to dance on the Saturday, with stands on Broad Street at 10am (alongside Mr Wilkins’ Shilling and the very impressive Winchester Morris), and outside the Pitt Rivers at 12:30pm (with Whitethorn Morris and our local friends Cry Havoc) – and we even managed to fit in a sneaky music session in the King’s Arms in between.

One of our fans* has taken some very nice high-quality video of our performances at Folk Weekend. The 1080p-60fps setting really does us justice.

(It also gives the Squire plenty of opportunity to see who needs extra practice!)

Oxford University Morris (OUM) perform Cotswold morris dances in Oxford and beyond. Our membership is made up of Oxford University students, alumni and staff of all genders. We often dance together as ‘Town & Gown’ with our friends the Oxford City Morris Men.

Think you might have what it takes to be a morris dancer? Join us for a practice & find out!